Save The Bobcat in NH 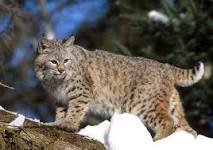 Below is information from the

***ACTION ALERT TO SAVE THE BOBCAT IN New Hampshire

Below is on the agenda of the NH Fish and Game Commission Meeting for January 21, 2015:

“Brief update on the population status of bobcats in New Hampshire. Draft bobcat season proposal to be discussed. (K. Gustafson, Game Program Supervisor & P. Tate, Furbearer Biologist).” The bobcat, because of its dwindling population, has been protected from hunting and trapping in NH since 1989. The bobcat is a very elusive creature and avoids people and population areas. Few of us have yet had an opportunity to even see one.

In the rare instance when one would be a problem that one individual could be managed. There is absolutely no good reason to randomly hunt and trap bobcats. The only reason would be to sell hunting and trapping licenses to enable hunters and trappers to benefit from the sale of their pelts. Please come out and show your support for the bobcat on January 21.

Please attend one or both of these.

#1 Plan on attending the Fish & Game Commission meeting that begins at 1:00 pm to show solidarity with the bobcat and keep the moratorium going against any killing of them. If you can fill some seats during the bobcat discussion by the Commissioners, that would be most helpful. Let’s all try to sit together. And if you choose to speak, the public is allowed to make comments during the discussion when recognized by the Chairman. There is also a public comment period at the end of the meeting, providing another opportunity to speak. Your comment can be as simple as saying your name and town and that you oppose the hunting and trapping of bobcats.

#2 Prior to the meeting we are having a peaceful, outdoor demonstration holding various “Save the Bobcat” signs while standing near the front door to the Fish and Game building.

What: Save the Bobcat actions.

The Commission meeting begins at 1:00 pm.

The bobcat discussion is item #3 on the agenda so could begin at 1:30 or 2:00 although this is hard to predict. The look on this bobcat’s face is that of a frightened animal watching as his tormentor approaches. Is this how we should treat our bobcats? It will be, unless we fight, and win, for them.

if you are unable to attend write or call to express your outrage.

You can also write Fish and Game to let them know what you think of them opening a season on bobcats.